The Power of BIPOC: Creating Your Pathway to Belonging at Work 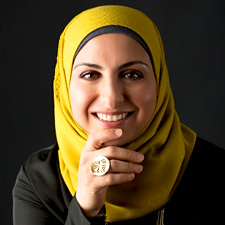 Named “World-Class Peacekeeper” and “Everyday Hero” by the Star Tribune, Hanadi is an inclusion consultant, Speaker and Coach. By sharing her experience as a Muslim, Hanadi’s trainings inspire and equip teams and leaders from different cultures to strategically move towards inclusion. Personal, thoughtful and uplifting, she connects with her audience and wins hearts and minds. As a thought-partner to leaders in business, education and government, Hanadi gives voice to communities of color and inspires workers from all identities to come together around shared our humanity. Her engaging workshops and presentations foster understanding and compassion for religion in the workplace, Islam, unconscious bias, minority empowerment and building cohesive teams. She is a Human Rights Award recipient from the city of Eden Prairie for her efforts in dismantling misconceptions about Islam and building bridges of unity. She has been featured in the Star Tribune for her community building projects and had been published The Washington Times, The Huffington Post, The Star Tribune, MinnPost, The Guthrie Theater, The Minneapolis Institute of Art and more recently Cosmopolitan magazine and Pantsuit Nation book. Hanadi joined the US State Department in 2016 as a speaker on social media and social change, and gave the TEDx talk entitled “A Lebanese approach to eliminate prejudice against Muslims” in 2017. Hanadi’s training sessions and keynotes have been featured at the National SHRM Diversity and Inclusion Conference, Leadership Diversity Alliance, The Forum on workplace Inclusion, The Multicultural Women’s National, EmERGe Conference, Serious Play, The National Diplomacy Summit and many others. Her success attests to her caliber and outspokenness. Before coming to the United States, Hanadi was an award-winning creative and communication specialist working across different media, including print and television in the Middle East.

The burden of feeling misunderstood, and in some cases unappreciated, prevents people from bringing their whole self to work. This has a direct effect on engagement, productivity, innovation, and self-esteem. In this workshop, Black, Indigenous, and People of Color (BIPOC) will revitalize their feeling of belonging. We will explore the mindset and actions needed to change one’s own situation at work and turn it into a more positive experience to be part of organizational change. We will go through a journey of empowerment and inspiration while creating a pathway to discovery. This is resilience in action. Participants will: ● Feel inspired to bring their whole authentic self to work and be confident about the value they bring to their organization. ● Identify actions that can help them transform painful experiences into powerful discoveries. ● Get in touch with the power within to change situations or start important conversations that render the workplace experience more fulfilling and complete. ● Define actionable items at the personal, team, and organizational level.